A few weeks ago I was given a job to do……I had to travel deep into the Pennines to find some relics of the area’s lead mining history that once covered this regoin and take a picture…I know it’s hard a life, but a lovely couple visited the gallery and having viewed my work asked me to photograph two ancient, lonely chimneys that stand on top of a moor near Blanchland, and capture the bleakness of the surrounding landscape. The client showed me the location on his Ordinance Survey map, but other than that I was given free rein to explore and photograph as I wished, so as you may guess I was really excited to get this project started!!

So with my good friend Joe Kelley (the very talented poet who wrote the fantastic poems for my book Fell) we set off to the moors which sit high above Rookhope in the south and Blanchland in the north, on the borders of County Durham and Northumberland. As we drove across the summit of Dead Friar’s Stones on the road to the remote village  of Hunstanworth, the vast moorland plateau of Allenshields and Buckshott Moor could be seen with the two chimneys standing beneath the summit of Bolt’s Law. So we parked up at the next layby, put on our boots and started walking. 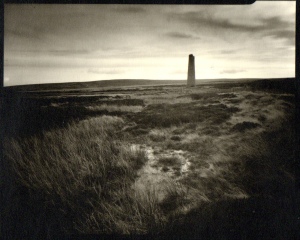 We headed towards the first chimney built sometime in the 19th century. It job was to draw the poisonous arsenic and sulfur dioxide gases which where created by the smelting of the lead ore. We followed the remains of the stone lined flue that ran up from the valley far below.  As we got closer his twin brother started to rise into view. 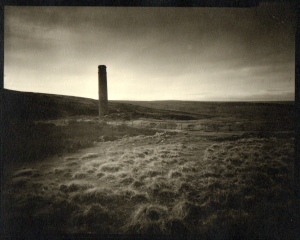 The second chimney had a markedly different character, while the first stood out bravely against the elements this one was tucked down in it’s own little valley on the edge of the fell. This was the site of the Sikehead Lead Mine and the chimney is all that remains of the engine house that housed a Cornish Beam Engine  which drew water from the mine shafts. 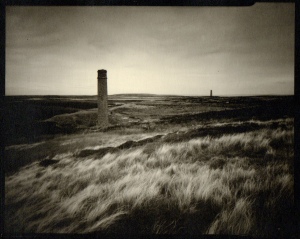 Twins Across the Moor, Shen-Hao TFC 45 with a 90mm Schneider Angulon with Fomapan 100 film.

It’s hard to visualise this being a place of industry and imagine these stacks pouring out black smoke and poisonous gases into the air, now all remains silent apart from the wind in the grasses and the mocking calls of grouse. Both stand as a testament to the people who worked in and built these mines and smelt mills.

When I got home I quickly developed my negs in Prescysol for 10mins and then contact printed them on Foma Chamois fibre based paper and got them to the gallery. The clients chose their favourite….but you will have to wait and see which one they like best and how the final print has turned out.