It wasn’t until late March that I finally got the chance to finish the double exposures which began life on my makeshift kitchen table studio. By then the late winter darkness had started to open up to the beginnings of spring and a weak sun shone through the bare branches of my chosen location. I had nicknamed this place Mirkwood (the title I also gave to one of my Stag Skull pictures that began this series of work), not only as a nod to the dark woods of  J R Tolkien’s Middle Earth, but also to William Morris’s anglicised term for Myrkviðr the mythical black forest of Norse poetry. It’s a strange, sombre kind of place, tucked deep into the side of the dale and divided by a clattering moorland beck, while the high sided fells cut out most of the sun light. The ground has always been damp when I’ve visited, centuries of fallen leaves have turned the woodland floor into a marsh which sucks at your boots. The little direct daylight and the sodden ground has forced the trees to grow gnarled and twisted, hung with lichen and scarred by past winters, their knotted boughs creaking in the gentle breeze. The wood has proved inspiration for a number of my pictures and I never tire of the myriad of shapes the branches form, every corner provides something new, it really is a place that envelops you and takes you out of modern world.

As with the other pictures in the Dain Series I had taken multiple exposures in the studio to experiment with in the wood. So armed with four pre exposed film holders I spent the afternoon exploring the different contorted shapes of the ancient trees while all the time surrounded by the sounds of running water and early spring bird song.  Hunting around the wood it didn’t take me long to find some possible backgrounds to compliment my fox, but one of the things I love most about this double exposure method is that no matter how much I try to envisage what my final picture will look like, it is not until the film is finally developed when I really know what I’ve managed to accomplish. But thankfully once again Mirkwood did not let me down and one of the negative compositions turned out just how I hoped. 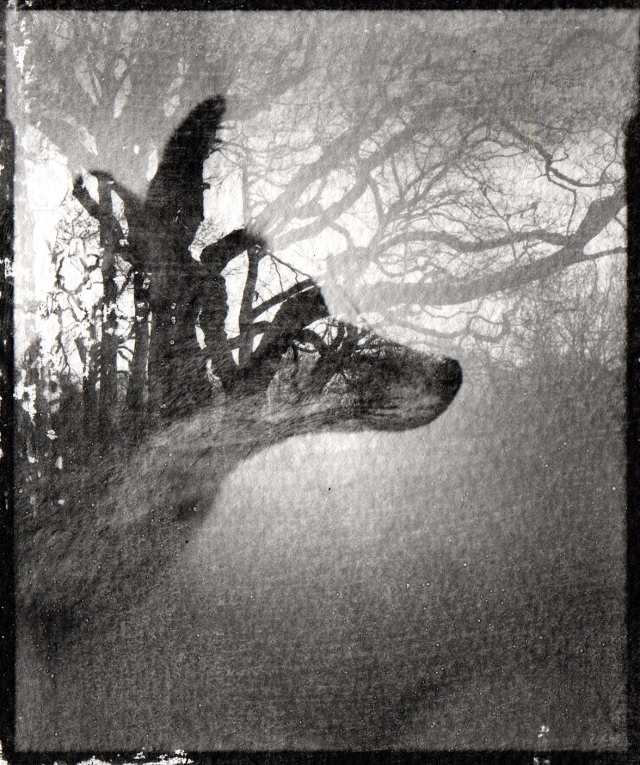 Well like for many my December was frantic! Every year it doesn’t matter how much I try to plan a head it always ends up mad dash to get everything sorted. But it’s always well worth it particularly this year with three separate print commissions and one off the wall sale all from Gallerina. All this work certainly kept me on my toes, so when Christmas eve finally arrived it was lovely to sit back and relax with the family and enjoy the festive holiday. But in all this madness I did end up with one free day, and lucky for me it coincided with the first snow fall of the year.

It was a Saturday and we had originally planned to pick our family Christmas tree, but plans soon changed when we found out Little’n was being taken to the Panto by her Nana. So with the day now free I decided to revisit a spot I first found back in the Autumn.  On that day gale force winds had meant it was pretty much impossible for me to capture the photograph I wanted, so it has been on the top of my list of places I had to go back to ever since.

The drive up there was definitely interesting and I had to take care in negotiating the numerous patches of snow and ice along the small road that runs across the moors between Bowes and Cotherstone. As I reached the highest point of the journey the days objective came into view the small rocky summit of Crag Hill.  From the road side it was a short walk to its top where in amongst the rough gritstone slabs and boulders which give this hill it’s name stands probably one of the most incredibly weather-beaten trees in Teesdale. It’s incredible to think that for decades this tree has stood what ever the elements has thrown at it leaving it twisted and scared, but for all that it  still stands on it’s wind swept craggy hill side.

During this trip I also got chance to try out my new Grafmatic film back. It holds standard 5×4 sheet film but instead of like the conventional double darkslide which only holds two sheets this carries six. The film is held in thin metal septums which are mechanical pushed to the front each time you want to make an exposure and then rotated to the back once exposed.  It’s really neat plus it is a lot more compact that carrying normal film holders, and on this trip it performed really well.

So that was my first post for 2015 thanks for reading!!

Back at the beginning of March with the sense of spring in the air and warm days to come me and my friends Dave Branigan and Tom Sheard hatch a plan to meet in the Lake District for a walking and camping expedition. We picked a date and because none of us had ever been there before we chose Dunnerdale (also known as the Duddon Valley) as our destination,  but as it always happens at this time of year mother nature had different ideas and very quickly the weather began to return to winter. Not to be dismayed we carried on planning while constantly keeping an eye on the ever changing weather reports.

Basically the plan was for Dave and Tom to head up on the Friday afternoon and set up camp, I would then meet them there the next day. By Thursday it looked like the weather was on the turn for the better, and according to the mountain forecasts the high winds and poor visibility was going to clear by the afternoon and Saturday was going to be breezy but clear. So first thing on Saturday morning with my car loaded with cameras and walking gear (in fact a lot more cameras than walking gear) I set off to the Lakes.  When I arrived once again mother nature hadn’t been listening to our plans or the weather reports. Throughout the night Dave and Tom had been hammered by high winds. So much so that the only thing that had stopped the tent from being blown away was them tying it to the roof rack of Toms car,  if they had any phone signal it sounded like I would have got a message telling me not to bother!! But with a little drop in the wind, a brightening sky and a new more sheltered location found to set the tent their enthusiasm started to return.

Dunnerdale lies in the Southwest of the Lakes District and begins west of the Three Shires stone on Wrynose pass where the river Duddon heads south from Pike O’Blisco. In the west are Harter fell and the Ulpha fells; eastward are Dow crag and Coniston Old Man but without  tourist hotspots like Ambleside or Keswick or the famous peaks like ScarFell and Helvellyn draw the crowds it remains quiet and isolated, which in my mind just adds to its appeal. With the guys lack of sleep from the previous nights storms and the chance of more gale force gusts we decided to put off the high summits for another day and explore the tangle of woods and crags of the lower slopes.  Travelling light with only my Rolleicord, a few roles of film and my tripod we set off!

Clearing. Hp5+ developed in Prescysol and printed on Foma Chamois.

Farmstead.  Hp5+ developed in Prescysol and printed on Foma Chamois.

It’s was a great walk and without being distracted by distant views I felt I was able to really delve into the atmosphere of  ancient woodland. We finished the day with a few pints of Corby Ale at the Newfield Inn in Seathwaite and then head back to the campsite for dinner. Now this is where Tom and Dave excel, these guys don’t mess around with gas stoves and Trangias, instead out came two fire pits and two cast iron dutch ovens, that night we dined on grouse roasted in hay and smoked breast of duck with new potatoes, now that’s cooking alfresco!!!

The han over and the washing up the next morning was not so pleasant though….